The city’s fundamental approach for mitigating the adverse impacts to public ash trees from EAB is guided by the following:

Ash Trees Along Streets and in Parks

Department of Urban Forestry staff has almost completed a citywide inventory of public street and park trees. Approximately 815 ash trees have been inventoried. Information on each tree includes its exact location; whether it is a green ash (Fraxinus pennsylvanica) or white ash (Fraxinus americana); its trunk diameter (measured at 4.5 feet above ground level); its general health status; and any specific, visible problems such as mower damage to the trunk, broken branches, or girdled roots. Approximately 600 of the ashes inventoried are “street trees” growing in one of three general locations: (1) the tree terraces between sidewalks and street curbs, (2) rights-of-ways along streets without sidewalks, and (3) boulevard medians (such as those on Fish Hatchery Road and McKee Road). Most of the remaining 215 are in mowed areas of parks, with some scattered on other city-owned property, such as the grounds around the two fire stations, the cemetery, and Nine Springs Golf Course. Most of the ashes along streets and in parks of older neighborhoods are green ash; most along streets and in parks of newer neighborhoods are white ash, usually the Autumn Purple variety.

The tree inventory does not include the 185 acres of city-owned natural areas, such as Dawley Conservancy, the woods in McGaw Park, or Quarry Ridge Park. Ashes, fortunately, are uncommon in these areas: plot sampling carried out in 2006 estimated the number at only 65. The city does not have the resources to include these ashes as part of its EAB management plan. One that becomes infested and is located such that dying or dead limbs and branches could present safety hazards to persons or property will be removed. But the city does not plan on treating any of the ashes in natural areas with EAB insecticide.

Is the City Treating Public Ash Trees with EAB Insecti 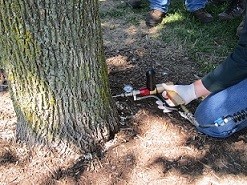 The city’s EAB management plan calls for treating ashes in parks and along streets with trunk diameters (measured at 4.5 feet above ground level) of 6 inches or more that are healthy, have good crown form, and lack any visible problems that could impair their health, such as girdled roots, weak branch attachments, or trunk wounds. The city has not yet decided on an EAB management strategy for ashes with trunk diameters less than 6 inches. (One option could be removal, regardless of health condition or other factors.)

An estimated 500 of the 815 public ash trees inventoried thus far meet the criteria for insecticide treatment. The city treated 151 ashes in the spring of 2013 with an insecticide (emamectin benzoate) injected through the trunk. It protects trees against EAB for up to three years. The first round of insecticide treatment on the approximately 350 remaining ashes should be completed by June 2015. Treatment takes place in the spring to ensure that insecticide reaches the leaves, which adult EAB beetles feed on. Trees will continue to be treated for several years until EAB is no longer present in the area or funding ceases.


Is the City Removing Public Ashes Along Streets and in Parks?

Yes, the city’s EAB management plan for an ash in either of these two locations calls for removal if it
Trees do not need to show signs or symptoms of an EAB infestation to be removed. Preemptive removal of as many of these ashes as possible will help the city avoid the logistical problems and safety hazards EAB outbreaks caused in cities unprepared or caught by surprise. Many were overwhelmed with the task of trying to remove large numbers of dying or dead ashes infested with EAB to keep residents, property, and streets safe from branches, limbs, or entire trees falling. Preemptive removal also can help the city reduce the amount of money it spends on private contractors with the equipment to handle large ashes. Removing a large ash that EAB has infested and killing is far more laborious and expensive than removing one while alive. (Safely removing dead ash branches and limbs requires extra caution since they are extremely brittle and can shatter apart upon impact with the ground.)

What if EAB Infestations are Found in Fitchburg?

EAB can easily go undetected for several years once a tree becomes infested. Although insecticide treatment can kill EAB present in a tree and save the tree in the early stage of an infestation, the city may remove any ashes on public property showing any signs of EAB.

The city will not be responsible for EAB infested ash trees on private property.  A homeowner will be required to remove an infested ash tree, with dying or dead limbs, that presents a public safety hazard.


Will the City Replace the Ash Trees it Removes?

Yes, as funding allows. The City Forester will select the type of tree.

Are Ashes on Private Property Subject to City Regulations Regarding Emerald Ash Borer?

The city’s Tree and Shrubbery Ordinance does include regulations for a tree on private property in the event it becomes a public nuisance due to insect infestation such as EAB. In most cases, however, the ordinance does not require that homeowners, business owners, or other property owners remove any ash tree on their property that shows signs of an EAB infestation.

The ordinance can require a homeowner, business owner, or other property owner to remove an ash that shows signs of an EAB infestation if the tree constitutes a nuisance such that it:

One or more of these criteria can easily pertain to an EAB-infested ash tree that has dying or dead large branches and limbs and is located close to public or private property.