On Tuesday, October 12, 2010, the City of Fitchburg Common Council voted 8-0 to adopt the SmartCode District as a new optional zoning district within the city. This is the first adoption of the SmartCode within the state of Wisconsin. The SmartCode is an important additional tool to implement Fitchburg’s 2009 Comprehensive Plan, which is based on core principles of Smart Growth and on long-term economic, environmental and social sustainability… [cont.]

The Common Council will meet at 7:30 p.m. on Tuesday, October 12, 2010, in the City Hall Council Chambers to consider adoption of the Zoning Code Rewrite documents which were approved by the Planning Commission in their September meeting. As part of their consideration, they will also hold a public hearing on the 2010 Amendments to the Comprehensive Plan and also the Chapter 15 Land Division Code updates.

In its June 22, 2010, meeting, Fitchburg Council referred out the Draft SmartCode, Draft Chapter 22 Updates and Draft Chapter 15 Updates to various Committees/Commissions. Downloadable drafts of these documents, as well as the proposed Comprehensive Plan Amendments, are now available for public review.

Second Code Draft Ready for Review: On Track for Public Comment in July

The second draft of the proposed Fitchburg SmartCode is available for online review.

This step puts us one step closer to adopting a new approach to zoning standards for future growth. To catch up on all the hard work that’s come before, start with the overview column to the immediate right. Then, scroll down the posts that precede this one. They’re in chronological order, beginning with the most recent… [cont.]

A New Option for Fitchburg: First Draft of Code Released

Building on the work completed during our planning charrette, the PlaceMakers consulting team and staff have since been working together to fine-tune the proposed new zoning option. … [cont.]

Fitchburg has the unique advantage of lying between the time-tested urbanity of Madison and the inspiring landscape of the rural countryside. Citizens have access to either in a matter of minutes.

Back to the Future: The Rural Hamlet

It’s a dilemma faced by rural communities throughout the United States, especially when those rural areas are threatened by sprawling suburbs: How do you juggle what seem to be competing goals?

Communities want to retain their rural character, both as productive agricultural land and as scenic landscape. Farmers need access to at least some of the cash they’d get for developing their land. And counties and municipalities want to minimize cost-per-household expenses of extending services deep into the countryside. [cont.]

Now Presenting: The Results of a Week of Collaboration

Just like the song: Tonight’s the night. After a week of sorting through ideas and testing them in collaboration with Fitchburg citizens, the PlaceMakers project team presents key components tonight of a zoning approach that will add alternative options to future development and redevelopment.[cont.]

Charrettes are designed to test ideas, sorting through them till the best ones emerge. The process requires give and take from citizens and consultants alike, so reality-tested concepts are the ones that can survive rigorous discussion.

During Wednesday night’s “pin-up”, PlaceMakers consultants tried out potential SmartCode standards—rules for everything from set-backs to special industrial districts to architecture—which stimulated plenty of comments. [cont.]

After more than two days of tours and meetings, the PlaceMakers consulting team took to the drawing board to sketch ideas. Then, they pinned sketches on the Community Center walls for a Wednesday night open house and citizen critique.[cont.]

Before exploring what a Fitchburg zoning update will do to shape the future of the City, it’s important to clarify what it will not do to existing neighborhoods and businesses. That was one theme of Tuesday meetings with developers, business people, neighborhood groups, and others. [cont.]

Monday night provided a great start for our zoning update “charrette”. More than 70 citizens showed up to help kick-off the four days of meetings and planning.

Introduced by Mayor Jay Allen, Susan Henderson, project manager for the PlaceMakers consulting team, provided a 20-minute introduction to the regulatory approach the team will use. Then, Jennifer Hurley, also on the consulting team, led the group through a table exercise designed to help citizens test some of what they heard in Henderson’s presentation. [cont.]

Where should growth go? What should be conserved and protected? And if we’re to encourage development, what models do we want to emulate?

Those were key questions for the charrette project team on Monday, as city officials and staffers conducted a tour of the Fitchburg and Madison areas. [...]

The prep work is done. The schedule is set. Now comes the fun part, five days of community collaboration to shape the rules for Fitchburg’s future growth. It begins Monday night with an Opening Public Workshop, 6-7:30 p.m., in the Oak Hall Room of the Fitchburg Community Center, 5510 Lacy Road. [...] 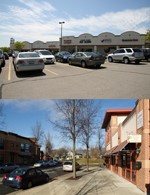 Thanks to a growing list of background studies, workshops, discussions and one-on-one conversations, the stage is set for a busy five days of collaborative planning February 8-12. That’s when community members, Fitchburg staffers and elected officials, and the PlaceMakers consulting team work together on key elements of a zoning update.

What do we know so far? Mainly that we don’t have to reinvent any wheels. We’ll be concentrating on two goals… [...]

The Dec. 2 Issue Identification Workshop came together as planned, as some 35 folks participated in a two-hour exploration of topics to put on the table for the creation of a new zoning district to augment Fitchburg’s existing ordinance.

(Just getting up to speed? Read about the overall process in the Project Overview column to the right.) [...]

Getting at the Heart of the Issues

It’s time to lay crucial groundwork for Fitchburg’s zoning update. So let’s spend a couple hours together Wednesday night, December 2, getting up to speed and talking about what’s important and how we want to focus our efforts.

How often do you get invited to a zoning code updating party?

Not often, if you get it done right the first time. And, okay, putting the words zoning code updating and party in the same sentence is not all that fair. But this is, indeed, a Big Event.

You can get the basic lowdown in the Project Overview column to the right. The message here is, reserve some time to participate – first by attending the Issue Identification Public Workshop, December 2 from 6 to 8pm, and then again during the February 8-12 block that will comprise the charrette. [...]