This video shows a Fitchburg plow at work in the Verona Road area.

You should take time to clear around your mailbox to ensure that your postal service is not interrupted.

Snow removal operations occasionally damage mailboxes. If the mailbox was installed and maintained according to current city standards and was damaged from being struck by the snow plow, Public Works may repair the damage or you may receive some reimbursement if the case falls within the city's mailbox damage policy. If the mailbox was not constructed or maintained to current standards, the repairs will be the homeowner’s responsibility.

To report a damaged mailbox either call Public Works at 608-270-4260, email publicworks@fitchburgwi.gov or use the "Report a Concern" button on the left hand column of this webpage.

The owner of each lot or part of lot shall remove or cause to be removed all snow and ice which may have fallen or accumulated upon the sidewalk in front of the premises which he/she owns not later than 6 p.m. of the day after the same has ceased to fall or accumulate; provided that when ice has so formed upon any sidewalk that it cannot be removed, then the owner shall keep the same effectively sprinkled with sand, salt, or other suitable substance in such manner as to prevent the ice from being dangerous, until such time as it can be removed, and then it shall be promptly removed. 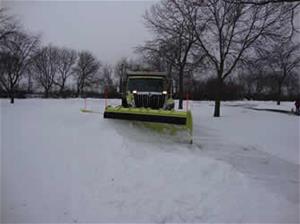 Our main objective is to keep our roadways open for the safe passage of traffic. Where possible, operators try to minimize the size of berms across driveways. However, the city does not have the resources to remove the snow berms. To help minimize the amount of snow in the driveway please see snow removal tips here. It is a violation of city ordinances to deposit snow removed from private property or driveway approaches onto public roadways. Tickets will be issued to violators.

In the event that severe winter weather conditions force us to discontinue service: