Fire kills more people in the United States every year than all natural disasters combined.

Residential Sprinklers
80% of all fire deaths occur in the home. The single most effective way to prevent fire-related deaths in the installation of residential fire sprinklers. Combined with smoke alarms, they cut the risk of dying in a home fire by 82% compared to having neither.

Fire Sprinklers Save Money
Through the use of trade-ups, developers and builders can achieve reduced construction costs while providing higher values homes for their customers. In the event of a home fire, homeowners can expect financial losses 90% lower than those that occur from fires in homes without sprinklers. Communities can deploy emergency service resources more effectively by reducing the burden caused by home fires.

Installing both smoke alarms and a fire sprinkler system reduces the risk of death in a home fire by 82%, relative to having neither.
Minimal Sprinkler Malfunctions
Each sprinkler is individually activated by heat. Despite “sight gaps” on TV sitcoms, smoke does not trigger the sprinkler operation. The rest of the sprinklers in a house will not activate unless there is also a fire in that location. 90% of all home fire are contained with a single sprinkler.

Water Conservation
According to the Scottsdale Report, a 15 year study of fire sprinkler effectiveness, a fire sprinkler uses, on average, 341 gallons of water to control a fire. Firefighters, on Average, use 2935. Reduced water damage is a major source of savings for homeowners.

Modern Fire Sprinklers
The likelihood that a sprinkler will accidentally discharge because of a manufacturing defect is extremely rare. Sprinkler mishaps are generally less likely and less severe than accidents involving home plumbing systems.

Unlike commercial fire sprinklers, residential sprinklers are small, and can be recessed in to ceilings or walls. Some models are completely concealed by plates that can be matched to room paint colors. 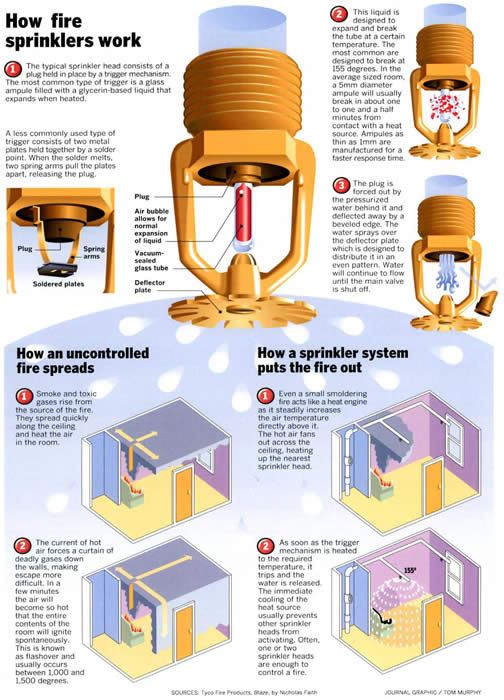